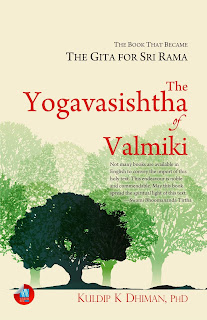 After Valmiki wrote the epic Ramayaņa, called in full, Poorva Ramayaņa, he was approached by Brahma, the creator of the world, to write a book that would free humans of worldly misery and make them eternally blissful. Thus, was born the scripture  known variously as Uttara Ramayaņa, Maharamayaņa, Arsha-Ramayaņa, Gyananavasishtha, Vasishtharamayaņa, more popularly called the Yogavasishtha .

By learning the ‘oughts’ of life, we can lead a good life, but this does not make us free of suffering. Even a so-called ‘good’ person maybe plagued with troubles such as anger, envy, jealousy, disease and old age and, ultimately, death.  Being a good person is not enough; something more is required. It is to teach this ‘something more’ that Valmiki wrote the Yogavasishtha. In fact, one can properly understand the popular Ramayaņa only by reading the Yogavasishtha .

Main questions
Ever since humans began to think and wonder, they have asked many questions. If we examine all these questions, we realise there are ultimately no more than a dozen fundamental questions. Such questions would arise in any thinking person all over the world in every age. They are perennial questions, and throughout the Yogavasishtha, these questions have been asked several times by Rama or some other disciple: What is this ever-changing world? Why is it there? Who created this worldand why? What was there before the creation of the world, and what will remain after it is destroyed? Why do we see so much misery around us? What is man? Where do all beings come from and where do they go? What is mind, and how is it quietened? How is illusion (maya) created, and how does one break this illusion and see the absolute truth? How does ignorance arise in pure consciousness?

Most of these questions, however, have no answers as they are beyond the scope of the intellect. When we try to answer these questions, we only get into further mess, and that is why the wise have called them ultimate questions, atiprshnas. One must, therefore, not waste time trying to solve these eternal questions, but find ways of quietening the mind and becoming blissful.

Nearly at the end of the Yogavasishtha, Vasişţha tells Rama about a dialogue between him and King Prajnapti.  The king puts twenty questions to Vasishtha, and the latter answers them in five chapters. If we read just this section properly, we would understand everything that is discussed in the Yogavasishtha.

Throughout the Yogavasishtha, Vasishtha answers Rama’s questions so thoroughly and repeatedly that at the end of it even a stone would get liberated. He says many things, and gives many proofs and arguments, but ultimately all these boil down to just one thing: how to quieten the mind and realise our intrinsic blissful nature.

Dr Kuldip Kumar Dhiman
I am a student of philosophy, philosophical psychology, literature, self-knowledge, art, science etc. I am currently doing research in Indian philosophy and psychology. My areas of interest are Vedanta, Samkhya, parapsychology, evolutionary theory, evolutionary psychology, Western philosophy etc. I have had three books published: Emotion: The Essence of Life (based on my PhD thesis); The Ultimate Iconoclast: Understanting Rajneesh Osho’s dangerous ideas; Param Vidrohi (Hindi version of The Ultimate Iconoclast). I have also done work in parapsychology, and have investigated cases of reincarnation. A paper about post-death bodily possession which was co-authored with Prof Antonia Mills of University of North British Columbia, Canada was published in the Proceedings of the Society for Psychical Research, London in October 2011. Another case suggestive of reincarnation which I investigated has been accepted for publication in Paranormal Review, which is published by Society for Psychical Research.